When the alarm went off at 4:00am this morning I knew that it was go time!  John was already up and in the shower....During the early morning hours of any of John's big races, he would typically get up around this time to "carbo load"...ironically enough he was also given the same instructions in order to prepare for the surgery.  It was like any other race day and the familiarity of this ritual gave me confidence and hope that this was going to be a Good Day!

Check in time for surgery occurs between 5:30-5:45 am.  When we arrived at the hospital I was a little taken aback by the amount of people already patiently waiting to check in, however, it was race day after all and these other runners were also preparing for a race of their own.  The check in process was quick and efficient and in no time John and I were escorted to the "holding bay" where the nurses took care of much of the pre-surgery prep.  We met with John's Anesthesiologist, who turned out to be the "Head" of the entire department... with that in mind we both had even greater confidence going into this then we already had before...John was going into surgery with the BEST possible team assembled and we couldn't have asked for anything better!  By 7:30am it was time to give John one last kiss and the reassurance he needed that all would be okay...it was going to be a long day for all of us who love him, but only a moment in time for him.  I left John feeling confident and excited to see him reach that first mile marker in the race...he was on his way!

Surgery as expected took 12 hours...having fantastic friends with connections working on the inside, I was able to get positive updates throughout the day which put my mind, and many of yours, at ease!  The waiting game after work was longer than I had expected...yes I went to work! Those of you who know me understand that this was the best place for me to be.  Staying busy all day didn't allow me to be swallowed up by the "what ifs" of the surgery....being in the company of a couple great friends and some much needed wine also helped me pass the time with ease until I received that highly anticipated "phone call".

Listening to the Surgeon and hearing him reassure me that everything went as planned and that he couldn't be more happy with the outcome of John's surgery, was like that feeling you get when you know you are "winning" in a very tight race...Pure Elation!  I know we will be finding out more details in the next few days but for now this is the best news we have had in a while!  When you begin a race as long as a Marathon it is important to feel good right out of the gates....and today we all feel PRETTY DAM GOOD!! I don't think that the love and support that John, myself and the boys felt today can be outmatched!  For this I am truly grateful and feel blessed and lucky to have all of you lining the streets and cheering John on through this challenging part of the course!  What would he say about all of this?..."Piece of Cake!"   xoxo 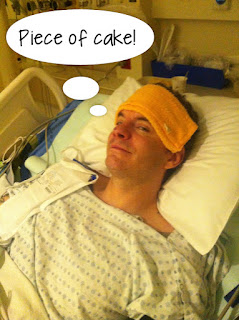