The Finish Line...but not quite finished! 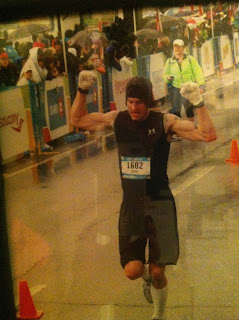 There are a number of emotions that are attached to the finish line…there is that sense of completion, accomplishment, satisfaction, dissatisfaction, heartbreak, disappointment, elation and joy. Marathons have a way of exposing your weaknesses while also highlighting your strengths. The finish line may mark the end of the race, but for some it can also mark the beginning of a longer journey ahead.

The last day of John’s final chemo cycle ended on Dec. 31, 2015.  It was a perfect way to say goodbye to what has turned out to be quite the challenging year. It marked the end of his treatment plan and hopefully the end of any further cancerous growths throughout his body.  Walking out of the clinic on that last day was a satisfying feeling for the moment, but the battle does continue even though John will no longer be subjected to the daily doses of radiation or chemotherapy.  More recently John was hospitalized due to a high-grade fever and very low white blood cell counts, which the body needs to help fight any possible signs of infection.  He spent 4 nights in the hospital wing of the cancer clinic where he received several litres of saline to combat his dehydration along with 4 pints of blood to increase his hemoglobin counts.  John is now battling pneumonia for the third time and is his body is still going through the wringer from what has been a very aggressive treatment plan.  But he is a true fighter in every sense of the word, and he will not let these set backs take away from the progress that he is inevitably making, regardless of how small it feels at times. It is often hard to believe that the body is capable of enduring so much punishment yet able to still come out healthier and better than ever before. If anyone can prove this to be true, it certainly will be John. The focus now is to ensure that John’s body is healing and that he is on the right path to a full recovery.

John has run several races now and after each one he has looked ahead to the next one. He dissects aspects of his run that he can improve upon while also acknowledging what has worked.  He has researched and learned a great deal from those who have had more experience, performed better, trained effectively or had pieces of advice to share.
In the coming months I anticipate that John will begin to build a new “training regimen” for himself, one that contributes to the success of this race that he will continue to run.  As the saying goes, John may have cancer, but cancer does not have him.

We want to thank all of you who continue to support John throughout his journey.  All of you have contributed in so many ways, particularly in lifting his spirits during some of his most difficult days! There are miles and miles yet to go when we consider what will be required for John’s recovery in the coming months. The first set of scans that will give us any indication that this has all been a success will not be until March, so although his feet may have just crossed that finished line, the race is far from being over!